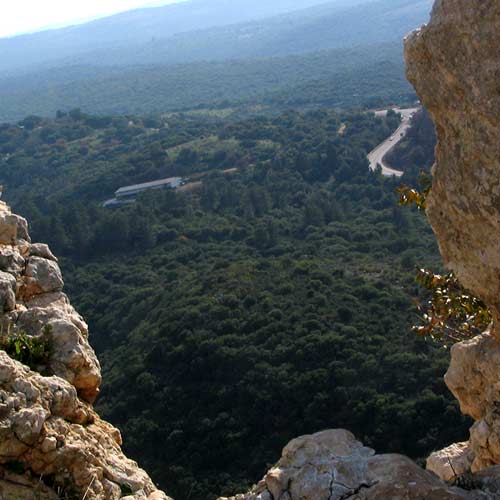 It’s no secret that hiking in Israel during the hot summer months can be challenging. An excellent way to survive the summer and still venture outside is to go on one of the great water hikes Israel has to offer and what a treat if your hike has a secret waterfall.

The Daraja, also known as “Nahal Dragot” in Hebrew, is a “must do” adventure hike, and by adventure, we mean it. Located in the northern part of the Dead Sea in Israel, this hike is more challenging than others, requiring rope in several locations to descend sheer cliffs sometimes 50 meters in height. The payoff, though, is the many pools into which you either slide or jump. The secret is to make it there after the winter rains when the pools are full and ready for another summer.

The Ein Gedi Nature Reserve boasts two waterfalls. Easy access to the better known of the two is via Nahal David. It used to be that you could actually go swimming in the pool surrounding the waterfall, but the authorities in Israel have since roped it off. Nahal Arugot, a well-kept secret among locals, is the less traveled canyon. The terrain is trickier but the waterfall is just as nice, and you can go in. For both routes, you can also hike above the waterfalls and look down for a spectacular view.

The Zaki (“clear water” in Arabic) involves hiking in water, together with swimming in some very deep lagoons for more than two hours. The Zaki is one of five streams in the Beit Tzaida Valley in Israel, just north of the Sea of Galilee. The riverbed is full of small stones and pebbles, making it easy to lose your balance so the secret is to wear sturdy shoes.

Zavitan is the longest Golan Heights stream. This water hike starts just outside the town of Katzrin. The first pools are about a mile in; after another mile, you’ll come to some deeper pools surrounded by perfectly formed six-sided and five-sided basalt columns. This hike ends at the 92-foot high Zavitan Waterfall.

The Jilabun Stream, which is marked by some impressive vertical rock walls, pools and secret waterfalls. The way into the canyon passes through Kfar Devora the 39-foot Devora Waterfall is just after the village. Hike through the streambed for about a mile until you reach the 134-foot Jilabun Waterfall. At the end of the hike there’s a “Secret Officer’s Pool” that was used by the Syrians until 1967.

The Black Canyon, one of the Golan Heights best kept secrets, is a deep canyon of volcanic stone, beautiful greenery and breathtaking views. This is an unmarked hike reserved for groups led by licensed tour guides only. This adventure is full of water and you’ll have the opportunity to rappel through three secret waterfalls.

Where ever you are in Israel you have a chance to hike in the great outdoors during summer and still stay nice and cool and maybe even experience a secret waterfall.

Need a Tour Guide? Click to Contact
PrevPreviousYam le Yam Amating Hiking in Israel
NextTen Most Fun Things to do in IsraelNext