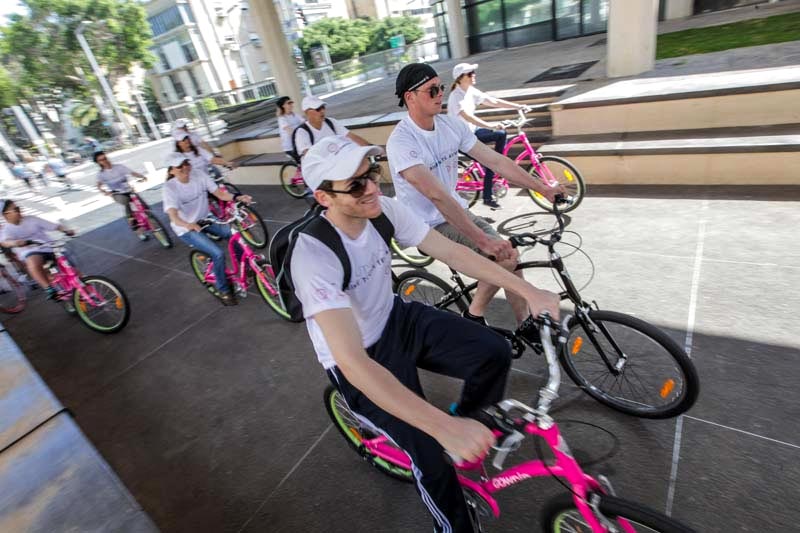 The Israeli Center for Bicycle Tourism

The Israeli Center for Bicycle Tourism was founded by a group of cyclists, all graduates of the Wingate Institute’s Bicycle Tour Guide course.

The Center operates from 135 Ben Yehuda Street and has a daily tour every day at 09:15 AM for a price of 160 Shekels per person.

The Tours are conducted in small groups of up to 12 people, on a unique “Townie” bikes (specially designed for an urban environment) intended, at this stage, for ages 13 and older.

We place special emphasis on the quality of the guidance and instructors.

The tour lasts approximately three and a half hours, and departs daily from the Israeli Bicycle Tourism Center at 9:15 AM.
The tour is suitable for everyone with at least basic cycling skills, and includes the city’s major sights, such as Neve Tzedek , Rothschild Boulevard, HaBima National Theater, and Rabin Square.

A combination of urban and nature.
The tour lasts about four hours and leaves at 10:00 according to the dates set forth, from the Israeli bicycle Tourism center.
The tour is suitable for everyone with at least basic cycling skills
During this tour, we will ride along the banks of the Yarkon river, and visit significant stretches of the river, starting from the Yarkon estuary up the river on unique bike trails, past the Sportek and other attractions, up to Seven Mills

The tour lasts about three and a half hours and suitable for everyone with at least basic cycling skills .
The tour leaves at 17:15 from the the Israeli Bicycle Tourism Center Bicycle Accordance to the dates set.
This tour begins at the old Tel Aviv Port in the north Following dedicated bike paths, we will cross the western part of the city through the Tel Aviv promenade and Marina – all the way to Jaffa Port in the south where we will enjoy a walking tour in the alleys of old Jaffa.

The tour lasts around three and a half hours and is suitable for everyone with at least basic cycling skills. It is held every Thursday evening, at 7:15 PM, as this is the most popular time for a big night out in the city.
The tour passes through the major entertainment centers of Tel Aviv.

Bike Tours in Israel
The Private tour is a tailor made according to the customer’s wishes and combines sites and content of the various tours. The tour lasts up to five hours and suitable for all those with basic cycling abilities, planned in advance and can take place at any time of the day. For example, private tour can be part of a private family event such as a bar-mitzvah, birthday or just a romantic gift.

Private tour can incorporate a stop at a restaurant, a bar or the beach…
The Private tour is aimed at groups of up to 6 people and costs 1200 Shekels. Each additional participant, up to 15 people, costs an extra 70 Shekels per person.

A tour designed for all types of riders suitable for amateur cyclists as well as semi-professionals. This tour can last up to half a day according to the riding region.
The premium tour is pre-planned in coordination with the customer preferences and ability level.
The riders are picked up from their hotel by a guide and Each rider is given a suitable bike in addition to all the necessary professional equipment.
The reservation is made by phone.
The tour pricing is made after we summarize the tour details with the rider.
For example, a five-hour tour of the outskirts of Jerusalem which includes transportation, bicycles, all related equipment and experienced guide who knows the secrets of the forest, will cost 1500 Shekels.